FIGHTING FOR VETERANS’ RIGHTS
Unlike other firms, we concentrate only on veterans' disability claims.
GET A FREE CLAIM EVALUATION

A traumatic brain injury (TBI) also called “acquired brain injury” or simply “head injury” occurs when a sudden trauma causes damage to the brain. Symptoms of mild TBI include headache, confusion, lightheadedness, dizziness, blurred vision or tired eyes, ringing in the ears, a bad taste in the mouth, fatigue or lethargy, a change in sleep patterns, behavioral or mood changes and trouble with memory, concentration, attention, or thinking. Persons with more severe TBI can have these symptoms but can also experience a headache that gets worse or doesn’t go away, repeated vomiting or nausea, convulsions or seizures, an inability to awaken from sleep, dilation of one or both pupils, slurred speech, weakness or numbness in the extremities, loss of coordination, increased confusion, restlessness, or agitation. 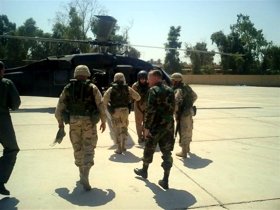 An estimate by the Rand Corporation placed 320,000 current or former combat troops as among those that may have suffered a brain injury. IED explosions are a major reason for TBI among the ground troops in Iraq. There is data to suggest that some individuals with TBI symptoms might really be suffering from PTSD.

The vast majority of brain injuries, or concussions suffered in combat are mild but previous estimates by the military indicate 20% of brain injuries cause symptoms that last a year or more. The worst symptoms appear in soldiers who lost consciousness.
It is important to file a disability claim with VA if you have experienced a head injury in service and suffer from any of these symptoms. This is true even if you have not yet been diagnosed with TBI. You should keep a log regarding your symptoms so you can relate this information to VA as your claim is developed. Contact us to see if we can help you develop the claim if it is denied by VA.

An estimate by the Rand Corporation placed 320,000 current or former combat troops as among those that may have suffered a brain injury.

I wanted to write to you & your staff to thank all of you for your support & assistance. Not having had much experience in dealings with attorneys I wasn’t sure what to expect. However I want to say that without your help, I’m sure I would have been even more frustrated with the Veterans Administration and their red tape and their “I don’t care attitude.” I know I made the correct choice when I contacted you.

Thank you very much for the support. It seems the VA doesn’t really care. They make appointments, cancel them and don’t tell me. Then, they cancel appointments and put me down as a no show. They also haven’t been refilling my meds which is a serious problem. It is nice to have people on my side.